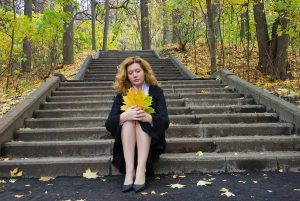 That you go through and then

You catch your breath and winter starts again

And everyone else is spring bound.

–Dar Williams, “After All”

Have you ever felt like this? If you’ve dealt with depression, I’m guessing that you have. Depression is more than just unhappiness, and it takes more than just “pulling yourself up by your bootstraps” to overcome it.

According to a fact sheet from PBS, about 15 million American adults, or about 8% of the adult population, will experience depression in a given year. About 80% of people with depression are not currently being treated, although 80-90% of people who obtain treatment find relief.

Depression can come in several forms. Some people have what is called major depression, in which there is at least one episode lasting at least two weeks that
includes the following symptoms:

If symptoms persist and the following additional symptoms appear, then professional help is needed:

There is also a low-grade form of depression, called dysthymia or dysthymic disorder. The symptoms of dysthymia are not as severe as in major depression, but they last a long time (at least two years).

Seasonal Affective Disorder (SAD) is a form of depression that occurs each year at the same time, usually starting in fall or winter and ending in spring or early summer; between 10 and 20 percent of the U.S. population may suffer from symptoms associated with the disorder. This mood disorder is often attributed to the lack of light during the colder months of the year. In addition, during the shorter, colder days of winter, people spend more time in their homes, leading to less socialization and increased isolation. This shift in routine can enhance the negative effects of seasonal changes and put individuals at a higher risk for SAD. Symptoms of SAD are similar to those of other types of depression.

The good news about depression is that is very treatable. Counseling and, possibly, medication can be extremely helpful. Unfortunately, many people do not seek treatment. When a person is depressed everything can feel like an effort, and the idea of seeking help can seem overwhelming. Depressed people tend to feel hopeless, too, so they may believe that treatment cannot help them. Some people believe that depression is a weakness or a moral failing rather than a legitimate medical illness. Many people think that depression means that you’re just unhappy, so they think that they should just be able to “get over it” without help. It is particularly common for people with dysthymia and seasonal affective disorder to go undiagnosed. Dysthymia can sometimes be perceived as being an “Eeyore type” of person who is never really happy. People who are unaware that they have SAD may just think they have “winter blues.”

In some cases, when depression is mild, it can improve without the help of counseling or medication. Exercise, socializing with supportive people, and doing activities that you enjoy are all very helpful in lifting depression. Above all, be gentle with yourself; when you are depressed, it is very important to set realistic goals and break tasks down into manageable steps. Understand that you are going through a difficult time and shouldn’t expect as much from yourself as you usually would. Don’t isolate yourself because you don’t want to be a burden to others.

If you think that you may have some form of depression, it is important to do something about it. To schedule a session, please call me at 240-401-8086.